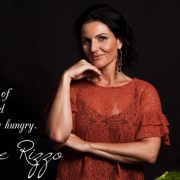 Dominique Rizzo went to Sicilia for the first time at the age of three.  With her Italian father and Australian mother, her older and younger brother, they stayed on the farm of her uncle.  It was here that she first remembers seeing the process of the pigs being butchered and meat prepared.  It was the start point of a lifelong fascination with simple, fresh food, and specifically, a love of Sicilian food which led her to carve out a successful career as a chef. 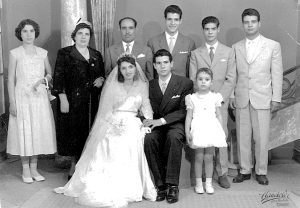 Dominique’s father, Vincent Rizzo came from a poor family in Palermo.  At the age of ten he left school.  At the age of eleven, he started working as an apprentice carpenter with his older brother Andrea.  His father, a seaman, had travelled all over the world including spending three or four years in Australia.  On his return to Sicilia, he talked of Australia and suggested  Vincent emigrate.  In  March 1961 at the age of 20, he boarded  the ship ‘Aurelia’ for Australia for a thirty-five day journey, before arriving in Melbourne.  It was the last  voyage for this ship, which was dismantled soon after.  The boat was small, quite rocky, and 35 days was a long time to be with with 1200 other migrants leaving from the port of Genova – a variety of nationalities including Spanish, Maltese, Yugoslav and Greek.  There were three people from Palermo on the ship, who he never saw again after disembarkation.  Sponsored by a friend, he found work and a home in Melbourne. 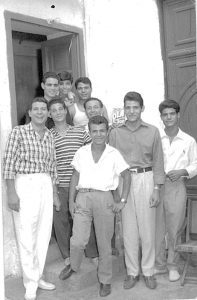 His first job was at the foundry making parts for tractors, working 12 hour days.  He learnt english from other Italian migrants who had been in Australia longer.  Vincent came to Brisbane to be best man at a friend’s wedding and while here he met his future wife at the dance hall, Cloudland.  When they married, he returned to his original trade as a carpenter as they began to build a life and family in Brisbane.  Vincent was the only one of his four siblings to come to Australia.
Dominique regards a trip to Sicilia for a gap year after high school, as the point when she felt a distinctive connection with her Italian roots.  The family had continued to regularly visit Italy during her childhood.  She remembers watching the cutting of pigs for the bleed and then the processing and use of every part of the animal. From the kitchen’s of her Zia’s and Nonna, she picked the vegetables, collected the eggs, rolled the polpette, stirred the pasta, picked the cucuzza and arranged the fruits.  She sat on a rickety stool cleaning garden snails, peeling vegetables, washing wild greens.  The menu could consist of tripe, goats heads, pigs trotters and intestines, rabbits, wild fennel, fresh broad beans, fresh pastas, grains, prickly pears, breads, goats cheeses or sheep infested with maggots being the delicacy.  She recalls the abundance and generosity of the tables, from those with so little, yet willing to share everything.

These experiences inevitably contributed to her love affair with Italian food.  Living with family and working in cafe’s during her gap year gave her a longer experience of the rustic land, peasant lifestyle and family filled eating extravaganzas.  She describes the recipes of her Italian family as being some of her most cherished , with the history of flavours from the most simple and freshest of foods.  Dominique continues to share her passion for Sicilia through her cooking and food tours back to her father’s homeland.  She describes the ongoing sense of joy on returning to Italia and the emotion on leaving.  Dominique’s life and work focus centres around her philosophy that ‘through the sharing of food we share life and one is never lonely or hungry.”

This story featured in a past edition of Italian Week, Italian Stories at http://www.italianweek.com.au/ItalianStories/1121/Dominique_Rizzo.aspx#.WET_rqJ95gd