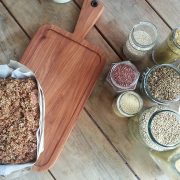 Millet is an ancient wholesome grain from the grass family growing on long soft textured stems. Different countries around the world are using millet in such interesting ways – as puffed millet snack slices in Japan, as sweetened porridge in Russian and as roti in India or simply added to winter soups and stews. It is also used in fermented drinks and foods and over the past few years the popularity of the grain has been growing, especially in gluten-free diets.   Rediscovering nourishing millet recipes is exciting and I love to cook with it as a nutritious alternative alternative to other grains. The raw seed millet is easily accessible in health food shops but make sure you buy the grain intended for human consumption, as the millet sold for pet food has the indigestible outer hull.

Eaten in moderation, millet gets the thumbs up for benefits of supporting a healthy heart, repairing body tissue and lowering the risk of type 2 diabetes due to its magnesium and phosphorus content.

Here are three of my favourite easy and delicious nourishing millet recipes for you to try. 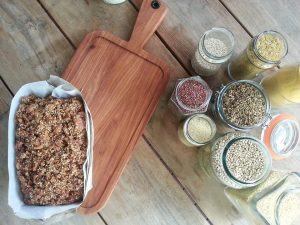 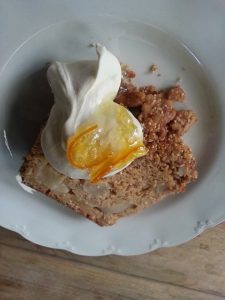 Recipe Steps:
1. Preheat oven to 170c fan forced. Line a loaf tin so that there is a 3cm high boarder above the top of the tin.
2. Combine the apple juice, ginger, cinnamon stick and the sliced pears in a pot making sure that the pears are covered and bring it to the boil. Turn off the heat and cover the pears, leaving them to cool in the liquid. Once cooled, drain the pears from the apple juice, chilling the apple juice down and using it for a refreshing drink, and set the pears aside.
3. Place the millet into a frypan and toast it over a moderate heat, stirring occasionally, until golden brown and just beginning to pop, 3 to 4 minutes. Remove ¼ cup of the millet and set the rest aside to cool. In a bowl whisk together the egg, sour cream, milk, quark and the vanilla and in a separate bowl combine in the flours with the baking powder, bicarb soda and cinnamon. Add the poached pear slices to the flour mix then pour in the egg; milk and quark mix and gently fold through the ingredients until just combined.
4. For the walnut granola combine all the ingredients including the set aside millet into a bowl and mix to coat with the butter. Pour the batter into the tin and heavily top the loaf with the walnut granola.
5. Bake the loaf covered with foil for 40 minutes then remove the foil and bake for a further 20 minutes until a skewer inserted in the centre comes out clean. 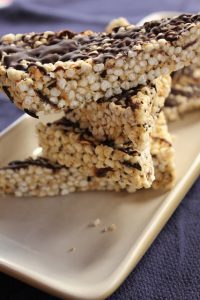 Puffed Millet Chia and Honey Squares
I am always fossicking in my pantry and giving myself a Ready Steady Cook challenge. I will often pick random ingredients that I may not have used in a while and creating something with them, this time it was puffed millet! I picked this up in a health food store to mix in with my muesli and have had half a bag sitting on my shelves for a while. This is almost liked puffed wheat a cereal that as a young child I can remember always eating.
Makes 20 squares
Ingredients:
• 4 cups of Puffed millet
• 1 cup desiccated coconut
• 2 tblsp chia seeds (available from the supermarket in the health food isle)
• 50g of almond flakes (toast these in a pan over moderate heat until golden)
• 135g organic butter (you can also use coconut oil)
• 4 tblsp honey
• ½ cup natural brown sugar (rapadura sugar can be bought from the health food shop, or you can also use coconut sugar)
• ½ tsp vanilla
• 60g 70% dark chocolate
Steps:
1. Place the dried ingredients into a bowl together and stir. In a small saucepan combine the honey, butter, sugar and vanilla and bring to the boil, simmer for 3 minutes then pour this into the puffed millet, almonds and coconut. Line a 20cm x 30cm tine and with slightly wet hands press the mixture into the tin until evenly distributed.
2. Melt the chocolate and drizzle over the top. You can set this in the fridge but it will also set out of the fridge. Store in the fridge or in an airtight container. 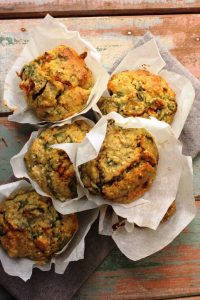 Steps:
1. Preheat oven to 180c. Place paper liners in a 12-cup muffin pan; set aside.
2. Place the diced pumpkin onto a tray and drizzle with the oil, season with salt and pepper and roast for 30 minutes. Remove the pumpkin from the oven and allow to cool.
3. Heat a large pan over medium high heat. Add millet and toast, stirring occasionally, until golden brown and just beginning to pop, 3 to 4 minutes. Set the millet aside to cool.
4. In a bowl whisk together the egg, sour cream, milk and the quark and in a separate bowl, then add in the flours with the baking powder, bicarb soda and the spices. Toss the pumpkin into the flour along with the chopped spinach and the millet and toss together covering the pumpkin with the flour.
5. Gently fold the egg mixture into the flour until just combined. Spoon batter into the muffin tins and bake until a toothpick inserted in the centre of the muffins comes out clean or they spring back when pressed, about 20 minutes. Allow muffins to cool in pan for 5 minutes, then transfer to a cooling rack or serve warm with your favourite relish.

Other: Makes 1 dozen muffins that are suitable for freezing.