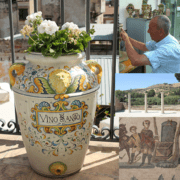 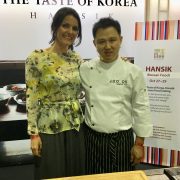 There is not a Korean BBQ in sight when Chef Shin takes us into his Hansik slow food kitchen at the Good Food & Wine Show with Chef Dominique Rizzo guiding the audience through each step of his cooking revealing the wonderful world of flavours of thistle pickles and kimchi that are synonymous with the taste of Korean food. 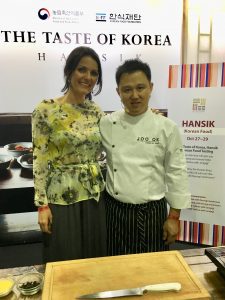 The essence of Hansik Cooking

Hansik is Nature
Earth is the source of life for man. Thus, the healthiest nourishment for man is earth’s natural foods, nurtured by the sun, rain, and wind.
Slow …… aged over time
Hansik is the ultimate slow food
The age-old practice of naturally fermenting food gives a deep and complex flavor to foods such as kimchi and jang (fermented sauce).
Vitalizing ……with seasonal ingredients
Spring is the son of new life when nature generously provides us with fragrant vegetables and herbs. The mountains and fields are covered with a variety of different namul (wild-greens, herbs and sprouts) and young vegetables that are harvested for cooking.
Harmonious Balance …… microcosm in a bowl
Korean cuisine is characterized by the balance and fusion of Five Cardinal Colors of blue (靑), red (赤), yellow (黃), black (黑), and white (白). These five colours, called obangsaek, also represent different spatial and seasonal elements, as well as the Five Tastes – spicy, sweet, sour, salty and bitter.
Rustic …… the feel of home
Hansik is unpretentious and humble. With its roots in peasant cookery, hansik consists of a wide range of hearty soups and stews that satisfy the stomach and comfort the soul.
Labor of Love …… in every bite
Hansik is prepared with great care and attention. Ingredients are always finely diced or shredded, then seasoned and mixed by hand. Taste is determined by the deft feel and skill of experienced hands. In Korea, we call this the ‘work of mother’s fingertips,’ which is the secret ingredient behind the flavorful and easy-to-consume hansik dishes. 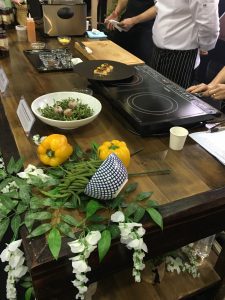 Chef Shin is the Owner and Chef of “Joo Ok”, a contemporary Korean Restaurant in Cheongdam-dong.  “Joo Ok” is a Restaurant recommended by MICHELIN Guide Seoul 2017.
Chef Shin was invited to the Gala Dinner at the 2016 World Hansik Festival hosted by the KFF; in 2014–2015 he was Chef at Michelin Japanese Restaurant ‘NOBU’ Miami Branch.

Check-in for a  Taste of Korea at the Good Food & Wine Show with Chef Dominique Rizzo, with recipes for two of the amazing dishes on the menu. 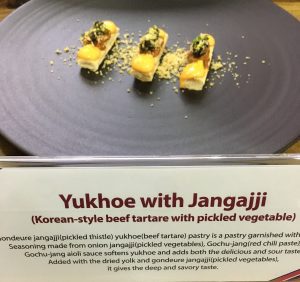 The Taste of Korea is unique in this dish of Gondeure jangajji (pickled thistle) yukhoe (beef tartare) pastry, which is a pastry garnished with yukhoe. The seasoning is made from onion jangajji (pickled vegetables), Gochu-jang (red chili paste), and Gochu-jang aioli sauce that softens yukhoe and adds both the delicious and sour taste. Gochu-jang mixed with Gochu-jang aioli gives the soft taste and texture. Added with the dried yolk and gondeure jangajji (pickled vegetables), it gives the deep and savoury taste. Inspired by authentic Korean food, the use of puff pastry is considered to be pleasing to the taste of Australians. 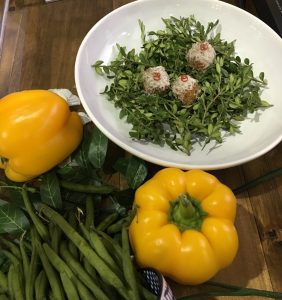 This dish is braised chicken with hawk’s wings mushroom.  Jjimdak (braised chicken in soy sauce) kromesky (fried croquette) with Neungi mushroom is a croquette made by frying mashed jjimdak and chicken feet, with the bread powder added. The dish gives the jjimdak taste with Ganjang (soy sauce) soaking into the soft stuffing inside the fried croquette. The dish sauced with Cheongyang red pepper sauce removes the fried dish’s typical greasy taste with its sourness. The kromesky is topped with bread crumbs dusting and Neungi mushroom powder to add to the autumn vibe.

Ingredients (for 2pcs)
– kromesky (2ea)
– Chicken drumstick (1,500g)
– Boneless chicken foot (750g)
Seasonings
– Bulgogi sauce (250g)
– Water (250g)
– Flour (1g)
– Egg (1g)
– Breadcrumbs (1g)
Garnish
– Cheongyang red pepper sauce (10g)
– Grana Padano (3g)
– Neungi mushroom powder (0.5g)
Steps:
1. Peel and remove fat from a chicken drumstick, and wash and remove moisture from chicken feet
2. Boil chicken drumstick, chicken foot, Bulgogi sauce and water in a pressure cooker
3. Once the ingredients (from step 3) boil up over high heat, continue to boil them over low heat for about 30 minutes.
4. Separate the soup from solid ingredients once they cool down
5. Tear the boiled chicken drumstick, and mash the chicken feet until the texture is softened enough for chewing
6. Gradually boil down the soup over low heat so that the soup gets suitably seasoned
7. Mix the chicken drumstick, meshed chicken feet, and the soup, and put them in a 2cm-high square tray inside a refrigerator.
8. Once they get hardened, cut them into a suitable size, cover the pieces with breadcrumbs, and fry them.
9. Once they are fried, cover them with Grana Padano cheese.
10. Place Cheongyang red pepper sauce on a plate, them put the cooked kromeskies on the top.
11. Lastly, sprinkle Neungi mushroom power on the kromeskies. 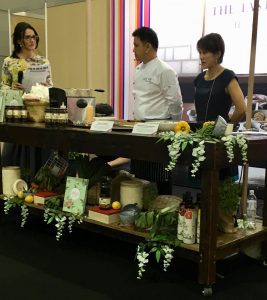 Heat the oil in a heavy based saucepan and sweat off the onion, rosemary and garlic until softened. Add in the chopped sausages and cook for a further 4 minutes until the sausages start to brown. Pour in the chicken stock, cannellini beans and the diced tomatoes and stir. Reduce the heat and simmer for 15 minutes. Season with salt and pepper and add in the baby spinach just before serving. 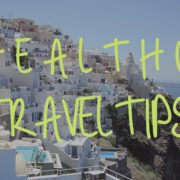 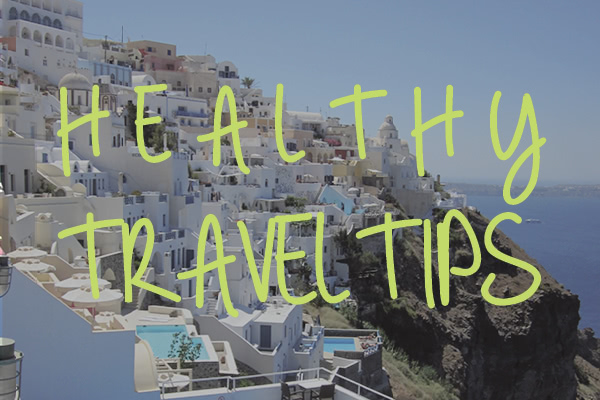 This season it doesn’t matter if you are going abroad or just cruising around our beautiful country, there is no excuse to let your health slide. Here are some useful travelling tips to stay in top condition and return home feeling revived and full of vitality.

1) Be well prepared so you can go with the flow.
If you are flying, always drink lots of water, take a small atomiser filled with water to refresh your face during flights. Snack on nuts, almonds, seeds and some small amounts of dried fruits. Eating fresh fruit will fill you up and have you less likely reaching for the chips, breads and salty snacks on the plane tray.
If you are travelling in a car or van cut up fresh fruit and drizzle with lemon juice to ensure no browning occurs. Take some whole meal crackers, cut up carrots, celery and or cucumber and a container of hummus or dip. Baked corn chips and healthier snacks like boiled eggs, snow peas or even your own frozen yoghurt will all stay fresh and chilled stored in an esky. Make yourself a container of fantastic salad, bring along shredded roast chicken or make some wraps. If you start strong – then the temptation to snack at the road side service stations is eliminated and you will save money meaning more to spend at your vacation destinations.

2) Don’t be a Spoil Sport….being healthy is not about missing out!
Make sure you take along some of those exciting treats that you love to eat at Christmas to have along the way. Try my gorgeous Chocolate Balls that have no sugar in them – they don’t need refrigeration and with their delicious chocolaty flavour you won’t believe they are good for you.

3) Make sure you have a healthy breakfast or brunch that will sustain you for hours.
If you are travelling by plane, after a meal get up and walk around to help with digestion and get the blood flowing. Remember we generally only eat 4-6 small meals a day so don’t fall into the trap of eating every time the trolly comes around. Ask for fruit and extra bottles of water, and if you feel like a drink, have one but follow it with water. My favourite plane drink is a Virgin Mary – spicy tomato juice, pepper, lots of ice and lemon, I have this when I think I may be hungry as it makes for a reasonably healthy in between snack.

If you are doing an adventure for the day, grab a tub of yogurt, a healthy muesli bar or a pre-made healthy muffin to get you going until lunch, we all know that the fresh sea air makes us hungry.

4) Be restaurant and menu savvy.
If you have to eat out, don’t dive straight into the fast food trap. Try to always choose a healthier option – burgers are fine as long as they are loaded with salad, and ask for what you want, say no butter, whole meal bread for a sandwich, grilled fish, dressing on the side – you’ll feel better for it and your body will thank you too. Did you know that you can eat up to 18 x fresh oysters or grilled prawns instead of just 3 x fried calarmari – and you won’t be denying yourself and again feeling proud of yourself for making the better choices.