Tag Archive for: trips to sicily 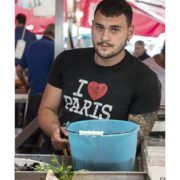 One of my favourite Sicilian tours takes in the region of Eastern Sicily, the rich lands surrounding the famous Mount Etna, the provinces of Catania, Syracusa and Ragusa, the towns of chocolate-loving Modica and the island of Ortigia and the alluring Aeolian Islands. We welcome you to charming, lively Catania which is, after Palermo, the second-largest city in Sicily.

Tour Western Sicily, personally guided by Dominique Rizzo to take an in-depth look at of Sicily’s most historic cities and sights. 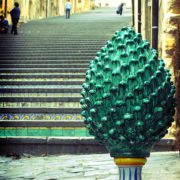 Perched on a hilltop like many hidden treasures is the town of Caltagirone, the town of ceramics.

A place which always takes my breath away on my trips to Sicily, is Caltagirone. 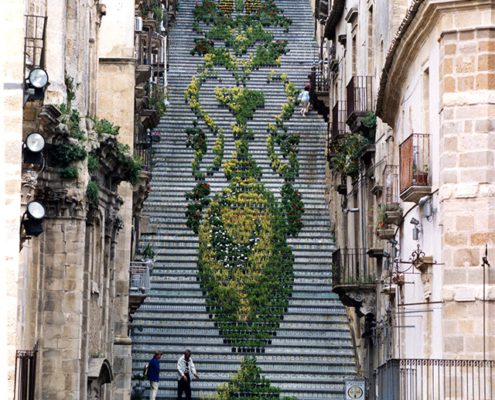 A long time ago, the soil here was perfect for making the original terracotta pots used by the Greeks. The original designs were usually yellows and browns with geometric patterns. Influences from the Arabs brought the art of firing. Pottery also became highly decorative with the introduction of colours such as blues and yellows. Designs became more intricate.

On your trips to Sicily, you will find a major interest in this tiny town with it’s wonderful staircase studded with decorated tiles. Colourful hand painted tiles line each of the 142 stairs. They entice you to journey to the top where the views of the town are magnificent. During the festival of the Madonna, the locals will line the stairs beautifully with tubs of flowers precisely placed. They form a floral design when you view the staircase from the bottom or top. In the evening they line the stairs with candles. This makes for an amazing photo and unique visiting experience.

They are often studded with the iconic ceramic pine cones that feature in many ceramic shops throughout Sicily.   The road leading into Caltagirione is lined with vases and glorious coloured cones. 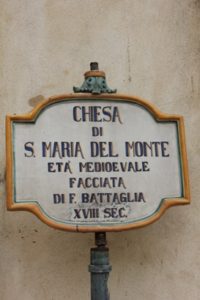 They remind you that this is the town of the vases. While browsing the many stores, you will notice that the ceramics come in many designs. With traditional and artisan patterns, some historically original and others unique to each artist. You can often find artists hand painting the ceramics as you enter in the stores. 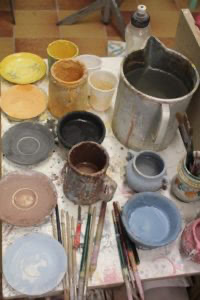 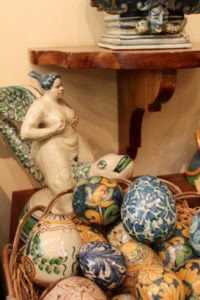 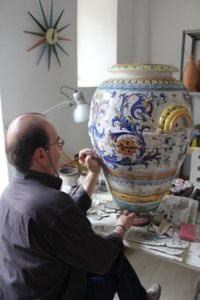 The ceramics are not only a sight to behold in Caltagirone, they are a fantastic experience of Sicilian culture that you can enjoy on my Sicilian Tours.

For the latest news on trips to Italy, go to Dom’s travels to Italy and Sicily, and her next tour dates 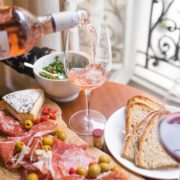 Italians and Sicilians in particular do cheese so well, that’s why I love to incorporate cheese as part of my Sicilian food tours! 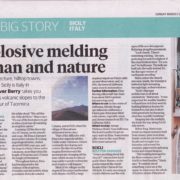 The Courier Mail’s the Big Escape story is one of the best articles about Sicily… Book now into Sicily 2020. 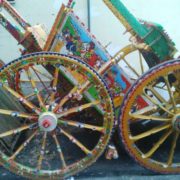 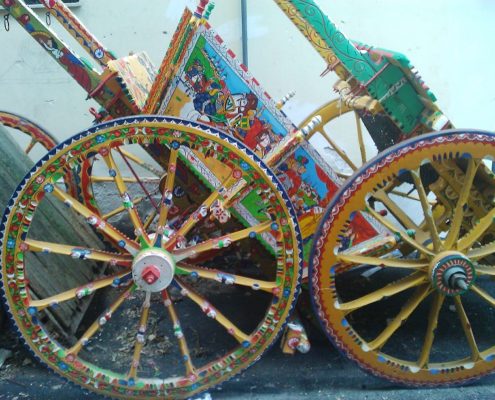 A beautiful cultural symbol you will find repeated throughout the region when you travel to Sicily is the Carretto. These carts, with their beautiful bright colours, are seen across Sicily. So how did Sicilians come to have the Carretto as such a rich part of their culture? Find out a little bit about the origins, the craftsmanship and the subtle differences of the Carretto.

The original idea of carts was introduced to the island by the ancient Greeks. However, the history of the now highly-recognised traditional Sicilian cart is relatively new. It dates back to the early 19th century and the need for transportation on the poorly-developed roads. It was thanks to the decree of 1830 that major routes, called “royal trazzere”, were opened. This is where the first appearance of the original type of wagon, the “stràscinu”, appears in history. This was a four-wheeled wagon whose front wheels are smaller than the rear, as in a type of carriage or cart.

The Sicilian carts reached the height of their popularity in the 11920s when many thousands were on the island. The carts were mainly drawn by horses in the city and on flat plains. Donkeys or mules were more often used in rough terrain for hauling heavy loads. The carts commonly used for pulling light loads, such as produce, wood, wine, and people, were called “Carretto del Lavoro” (cart for work). They were also used for ceremonies and festive occasions such as weddings and parades, where they were called “Carretto de Gara”. The Carretto was almost like the taxi or truck of today.

The cart has two wheels and is primarily hand-made out of wood built by woodcarvers, metal workers, and painters. The woodcarvers carved the many panels that were often historic reliefs. The metal workers worked the iron in a “ferro battuto” style, which included highly-decorated metal undercarriages with iron metal components. The painters had great skill depicting brightly painted scenes from Sicilian history and folklore, as well as intricate geometrical designs. These scenes also served the purpose of conveying historical information and important historic events in Sicily. Originally meant to keep in memory the turning points of local history for those who couldn’t read.

The colours of Palermo’s flag, yellow and red, feature prominently on the carts, along with details in bright blues and greens. Many of the carts showcase, in intricate details, religious scenes. They may depict the story of Jesus or that of his mother, and patron saints in Sicily, such as St. John the Baptist, Santa Rosalia, the patron saint of Palermo, or Sant’Agata, the patron saint of Catania. Some have been found to have scenes or visions of the saints, Charlemagne, operatic scenes, and the histories of Napoleon, Columbus, Cortez, and even Mussolini.

The Sicilian Carretto is still made in several provinces in Sicily, each with its own style. Carretti made in the province of Palermo have more of a square box design. Those made in Catania are made with more elaborate “keys.” Then, there are the carts made in Agrigento which have their own distinctive style. The craft of making the carts is handed down from generation to generation through the training of apprentices. The animals pulling the carts are often elaborately adorned as well, with a decorated plume covering their head and a headband decorated with plaques of leather and gilt nails and bells. They also wear another elaborately decorated piece in the middle of their back.

Today the Sicilian Carretto can be found available for tourists to enjoy in some museums, while smaller Carretti can be bought as souvenirs. They are often depicted in artworks, postcards and pieces of the old Carretto can now be found on the walls of hotels and homes.

See it for yourself

Just one of the fascinating aspects of Sicilian life. Learn more about this beautiful region by visiting it yourself. Join Australian Chef Dominique Rizzo on a gastronomic and cultural food, wine and cooking tour of Sicily. Click here for more information about touring this amazing region. 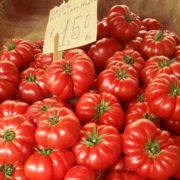 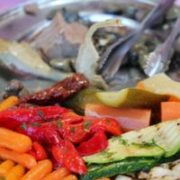 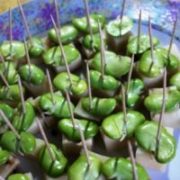 From the coastal town of Taormina and for lovers of very good wines you cannot pass Mt Etna and surrounding towns. This is an area I love to visit on my tours to Sicily. 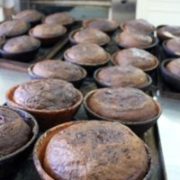 Ricotta you could almost say is Sicily’s mascot cheese. You can find it in so many different dishes, desserts and applications and comes in a variety or degrees of fresh, cooked and dried.

Tag Archive for: trips to sicily 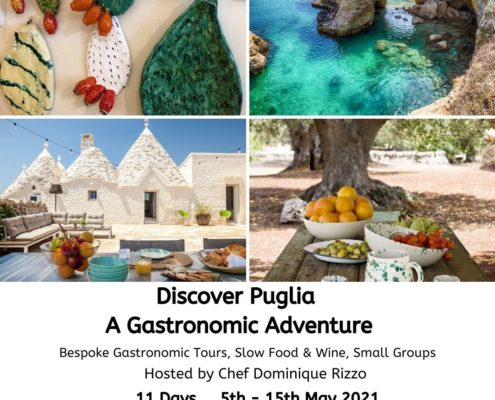